Keep track of what matters to your citizens.

Written by Rabi Wilson
Updated over a week ago

What are citizen proposals?

Citizen proposals are a continuous form of bottom-up participation. This type of participation differs from the current idea-gathering approach of the platform because it doesn’t fit into the limitations of an existing project. Rather than responses to a fixed question asked by governments (ie “what colour should the bins be?“), these are items initiated by citizens themselves (ie “we want to change garbage collecting routes“). You could for instance compare it with an open "idea box".

Citizen proposals allow citizens to write down their proposals at any time, and gather support for their proposal. Proposals that reach a pre-defined threshold are promised to receive 'a response' from you. A proposal may be a simple request to the city, but it might also require the city to play a supporting role in the spirit of co-creation.

Citizen proposals allow you to keep track of what your citizens deem important, right on your very own participation platform. You’ll always have a good sense of what’s missing on your policy agenda. And you offer your citizens a place to give input on topics that aren’t covered yet by one of your existing projects on the platform.

You set the rules, and when a proposal meets these rules, you promise to ‘do something in return’. If it doesn’t meet the rules, it stops right there.

You remain in control at all times, and our platform gives you the necessary tools to be able to monitor the activity on the platform.

You remain in control of the process by defining the conditions for citizen proposals. Clear rules increase transparency and will make selection easier for you.

The number of votes required for a citizen proposal to be considered. As a rule of thumb, this is often expressed in % of your total population (ie 1-3% of the population).

B. Days to reach threshold

The amount of days one has to gather that support. It’s important to find a balance between allowing enough time to rally support versus motivating people to actively work on their proposals. 3 months, or 90 days, is in many cases ideal.

C. The criteria for a proposal

The eligibility criteria are shared with everyone who starts a proposal.
A commonly used set of such criteria: “The proposal should…

What can people expect when their proposals reach the threshold in time?

This is the most important step. Here, you’ll define what happens when a proposal gathers the required number of votes within the number of days. The most common option is to invite the proposal author(s) to the next council meeting to present the proposal, and where the council will give an official reaction on it.

But it is totally up to you to offer something that suits your context most and that fits your needs and available resources.

This choice is clearly shown to all citizens, so they know what to expect and what not. It’s all about managing expectations.

All platforms currently have 3 default success stories to inspire citizens. Contact us if you would like to make some invisible or if you want to add local inspirational cases.

Once you've finished the configuration steps above, you're ready to enable the citizen proposals on your platform. This is done by the simple toggle in the 'Configuration' tab. Only when this toggle is on, proposals will become visible to your citizens.

In the 'Overview' tab, you can easily follow up on all running and new proposals. You can discover who has been assigned to them, how many days are left and how much support they already gathered.

New proposals and proposals that reached the voting threshold are also listed in your weekly email report. 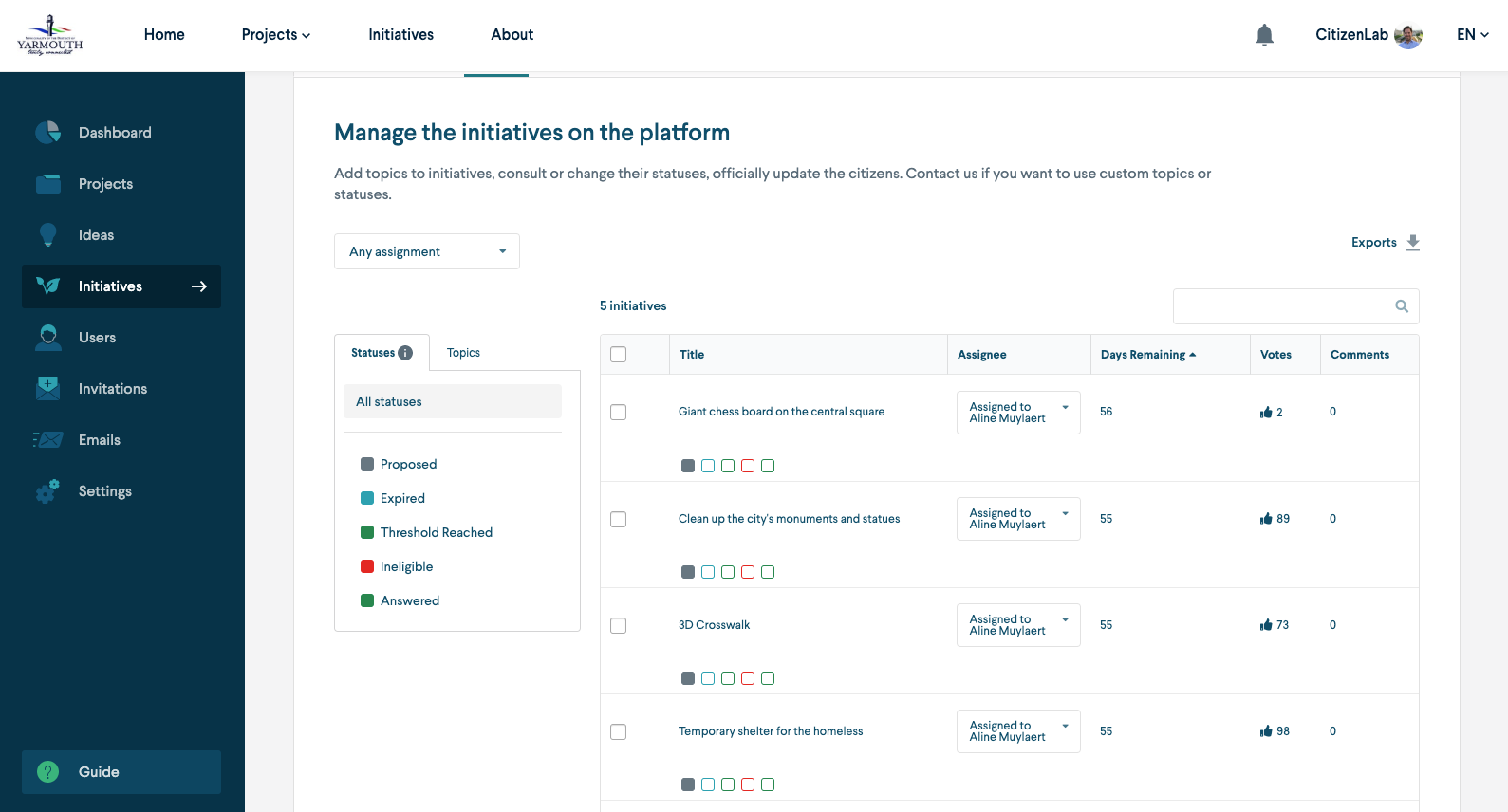 Every new proposal can be assigned to yourself or one of the other admins on the platform. By doing so, that person becomes responsible for the follow-up and will be notified when her/his action is required.

3 out of 5 proposal statuses are automatic ones, and can't be manually selected.

The other 2 proposal statuses are manual ones. You can decide when to give which proposal one of these statuses.

Note: even if a proposal is expired or didn't reach the threshold yet, you can always decide to already/still move forward with it (e.g. because it matches your existing policy plans).

Selecting one of these manual statuses will require you to give a written update to that proposal, visible to all.

Ready to implement citizen proposals on your platform? We're here to help!

Did this answer your question?